Are you looking for facts about Japan? Then you’ve come to the right place, I love Japan! It’s a fascinating country with a unique culture and society that you really can’t compare to other countries in the world.

And here, I’ve made a list of 15 Interesting facts about Japan, and further down in the article, you can also read some general Japan facts. To make this article even more fun, I challenge you to test your knowledge about Japan.

How many of these facts about Japan do you already know? Leave a comment below with your results!

1. There are more seniors than kids

A pretty sad fact about Japan because it’s actually a big problem and there’s a lack of childbirth. The people don’t have time or money to have a family in today’s Japanese Society. And this has led to the situation where there are more seniors than children.

And did you know that they actually sell more adult diapers than kid’s diapers? I don’t know about you, but to me, that’s one of the more bizarre facts about Japan!

The Japanese islands of Okinawa have one of the world’s longest lifespans, and currently, the oldest humans in the world are two Japanese people at 117 and 116 years old.

2. Has one of the world’s lowest crime rates

Japan is one of the safest countries in the world, so if you worry about crime, you should probably look into moving here. The most common crimes here includes stealing a bicycle or umbrellas left outside the convenience store.

At the metro and trains, you can see locals who take a nap while having their phone in their hand or clearly visible.

It’s also not uncommon to see people walking around with their backpacks and bags open. Another thing, people don’t even lock their homes all the time or their bicycles! That’s how safe it is in Japan.

3. Most vending machines in the world

One of the things you will notice when traveling to Japan is the huge amount of vending machines. They’re literally everywhere, around every corner, and it’s almost like they’re part of the modern Japanese culture, but also a good and convenient way for the companies to sell beverages and make money without paying staff.

In the big cities, you can find both hot and cold coffee in the vending machines along with various other types of drinks, including water on a bottle. A lot of restaurants have started to implement vending machines as well, to let people order food.

There are also plenty of vending machines selling snacks and food directly in the cities.

You might know that Japan is an island nation, but did you know that there are more than 6800 islands in Japan? The four biggest islands are Honshu, Hokkaido, Kyushu, and Shikoku, which together makes up about 97% of the total land area.

And don’t forget about the paradise islands of Okinawa with its beautiful beaches and tropical climate.

5. To clean is a part of the education in many schools

Law and Order is a big thing in Japan (I’m not talking about the TV-series), and it’s important to learn this already as a child. That’s why a lot of Japanese schools are making their students clean toilets, classrooms and the school area.

This also saves money because the schools won’t need as many cleaners.

Imagine if this was the case in your country? I can only speak for Swedish schools, but it would be an outcry, to say the least. That’s why I think this is one of the more interesting facts about Japan!

6. Japan has a Penis festival

The festival is known as Kanamara Matsuri, which means something like “the festival for the phallus of steal”.

The festival is celebrated in the Japanese city of Kawasaki on the first Sunday in April. In short, just about everything, including candy, vegetables and decorations have the shape of the male reproductive organ or other things related to fertility.

The number will vary from year to year, but in general, there will be more than 1500 earthquakes in Japan. Luckily, most of them are smaller shakes, but each year there are bigger earthquakes as well that reaches more than 8 on the Richter scale.

8. To take a power nap at work gets more and more common

Japanese people are working more than any other country in the world and the working days are long. Since a couple of years back, some employers are letting their employees take a power nap at work, to recharge and get more energy. It’s pretty interesting, and overall I would say that power naps are very common in Japan, and you will constantly see people taking power naps on trains.

9. Fruit is one of the best gifts

Although fruit, in general, is getting cheaper to buy in Japan, the tradition from the past lives on. Back in the days, it was really expensive to buy fruits because only a handful of fruits grow naturally in Japan.

It’s still expensive compared to many other countries, and it’s still regarded as a great gift when meeting someone special.

Only the USA has more Mcdonald’s restaurants in the world than Japan. Despite that, it’s very rare to see obese people when walking around the cities.

11. To slurp up the noodles is considered polite

If you go to a noodle restaurant in Japan, (which you should) don’t be afraid to slurp up the noodles. On the contrary, this is considered polite.

According to Japanese customary, it’s polite to slurp up the noodles since it shows the cook that you appreciate the food and at the same time, it enhances the flavors.

12. Many Japanese eat ready-made breakfast or dinner from a supermarket

Family Mart, 7 Eleven and Lawson are the big chains running convenience stores in Japan. All of them is selling ready-made foods that can be heated in the store. You can also buy noodles and prepare them with hot water in the store, or buy ready-made sushi rolls, sandwiches and other kinds of meals.

To eat breakfast or lunch/dinner at a supermarket isn’t considered weird. Fact is that most people don’t have time to cook a full meal at home before they go to work, and that’s why it’s so convenient to buy a hot or cold coffee in the morning along with a sandwich or onigiri. 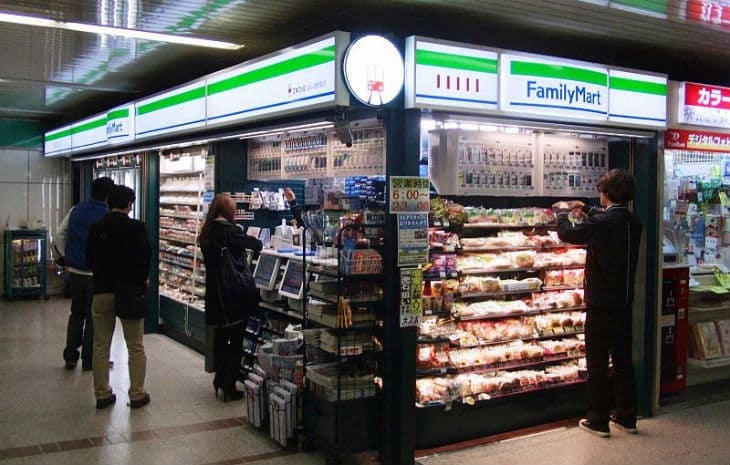 This is a Family Mart. There are also bigger supermarkets with seating.

13. There are cafes where you can pay to cuddle

But there is nothing sexual about it. The reason that these cafes exist is because a lot of inhabitants are single and loneliness is a big problem in Japan due to too much work. That’s why there is demand for cuddling and intimacy, and at these cafes, you can come and get a hug or just lie down in someone’s lap, or spend time together with another human being.

Yet another one of those interesting and bizarre facts about Japan, which isn’t something weird at all there. With that said, not every Japanese man or woman visit cuddle cafes. It’s still a minority we’re talking about.

14. It’s forbidden to bathe in hot springs and onsen with tattoos

Luckily, nowadays many places offer guests to cover their tattoos with a skin-colored band-aid.

If you can cover them, you’ll be allowed to take a bath. However, not all onsen are this strict because things are slowly changing since the tourism organization of Japan is trying to make it easier for foreigners to explore the country.

15. In Japan, you bow instead of shaking hands

For international guests and business persons, you will probably shake hands because Japanese people always want to be polite and welcome their guests with their own culture. But if you want to show the same politeness and cultural awareness, you should bow instead of shaking hands.

According to tradition, the lower you bow, the more respect you show towards the other person. Bowing is also something you do a lot in Japan, and below you can watch a full video on how to make a perfect bow, and when to use the different kinds of bows.